Earlier this month, Governor Snyder signed a new school aid budget for fiscal year 2018, which begins in October 2017. A new analysis from The Education Trust-Midwest focuses on key opportunities realized and lost through the state budget.

Education and equity advocates have much to celebrate in this budget, including additional dollars for our most vulnerable students. Despite this progress, changes made to the state assessment should be concerning to all Michigan students, parents and educators.

The final budget comes after months of debate on the roughly $14 billion, which is the primary source of public school funding in Michigan.

As described in our March 2017 analysis of the Governor’s executive budget recommendation, the state budget provides important opportunities to advance equity and educational excellence. Money alone, however, will not improve our schools. As leading education states have shown, bringing about extraordinary improvement in student learning requires strategic investments in sustained, transformative and systemic changes.

This week, the U.S. Department of Education is expected to provide feedback to Michigan on our recently-developed education plan. Recent remarks by State Superintendent of Education, Brian Whiston, would suggest that Michigan’s plan comes from broad consensus and that federal feedback could interfere with what is best for Michigan students.

These remarks are far from reality.

In Michigan, stakeholders have long challenged parts of the plan that would widely ignore groups of students, mask poor performance, or move away from evidence-based practice. This includes:

Given the wide range of feedback on shortcomings in Superintendent Whiston’s plan, hopefully the Michigan Department of Education will make the changes necessary to put the needs of Michigan students first.

The legislature is currently in recess and is next scheduled to meet on Wednesday, August 16. Regular session resumes after Labor Day.

The next meeting of the State Board of Education will be on Tuesday, August 8. The agenda for this meeting will be available here in early August. 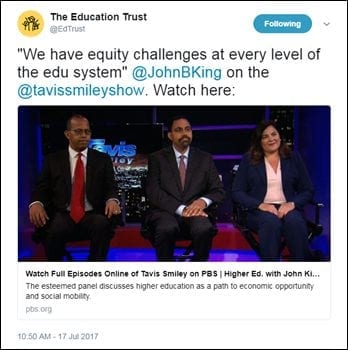