Michigan wants its ESSA plan back? Why a Lt. Gov. asked for a do-over

The following excerpt is from an article that posted on May 11, 2017 on The 74 Million. The full text is available here.

Michigan Lt. Gov. Brian Calley has one message for U.S. Secretary of Education Betsy DeVos: Send our ESSA plan back.

Days after the Michigan Department of Education submitted its plan for complying with the new federal education law, Calley posted a letter on Facebook asking DeVos to send it back for Michigan policymakers to revise how the state counts special-needs students.

In the ESSA plan Michigan submitted April 17, the n-size [n-size is the minimum number of students needed to form a subgroup for reporting and accountability purposes] would depend on which of three school accountability proposals state lawmakers choose. Gov. Rick Snyder, who is term-limited, signed off on the ESSA plan.

In two of the three systems, the state Department of Education would award letter grades to every school and set n-sizes at 10 for English language learners and 30 for all other subgroups.

Snyder and State Superintendent Brian Whiston say they favor awarding letter grades in some form, but the elected state Board of Education unanimously supports a transparency dashboard.

This excerpt is from an article that posted on May 11, 2017 on The 74 Million. The full text is available here.

The Michigan Students Achieve Coalition, of which The Education Trust-Midwest is a member, is committed to ensuring that Michigan’s ESSA plan focuses on academic excellence for all students, prioritizes closing opportunity gaps for historically underserved students, and ensures honest and transparent information for Michigan families and stakeholders.

Representative Tim Kelly (R – Saginaw Township) has confirmed that he expects U.S. Secretary of Education and Michigan native Betsy DeVos to appoint him as assistant secretary for career, technical, and adult education.

Rep. Kelly, who chairs the Education Reform Committee and the K-12 appropriations subcommittee in the Michigan House would resign his seat, in order to join the U.S. Department of Education. Rep. Kelly is currently serving his third and final term in the State House and previously served Governor John Engler as an education policy advisor.

Our Nation Needs You – John B. King Commencement Speech at Howard University School of Education

State Board of Education meets today, May 16, at 9:30 a.m. in the Ladislaus B. Dobrowski Board Room in the Hannah Building. Agenda: includes a presentation on the Grand Rapids Public Museum School, Top 10 in 10 and Early Literacy, as well as a discussion on the use of a dashboard in place of school accountability and the special education stakeholder survey. 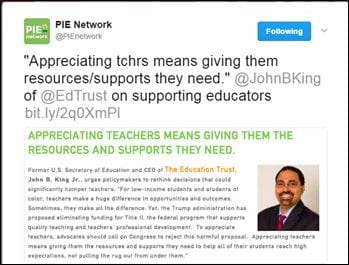 Correction: A chart appearing in the emailed version of our May 9, 2017 edition, titled “Funding Disparities by Race,” included an error in the chart legend. The legend should have labeled green as “yes” and red as “no.”