“You need to expect students to perform at a level, because if you don’t, they won’t.”

Former Lt. Governor John Cherry was back in Lansing last week, urging a senate panel not to dumb down Michigan’s high school graduation requirements – the Michigan Merit Curriculum. Cherry explained that “you need to expect students to perform at a level, because if you don’t, they won’t.”

According to data, the Merit Curriculum has “moved the ball forward.” Since its passage, high school graduation rates and college enrollment rates have increased, while the dropout rate has decreased. “That doesn’t mean we’re where we need to be,” he added, “but we’re moving in the right direction.”

The Merit Curriculum was created in 2006, after a commission led by then Lt. Governor Cherry made recommendations on needed changes to high school expectations. The commission was formed to both ensure that Michigan students entered the workforce with the skills needed to succeed and to double the college graduation rate.

In a controversial move, the MDE broke promises made for more than a year by eliminating school accountability from a state education plan that was recently submitted to the U.S. Department of Education (USED). In a stunning admission, Deputy Superintendent Venessa Keesler acknowledged that the plan submitted to USED is incomplete. “The dashboard can be thought of as a rolling process,” Keesler told the State Board of Education. “We’ll keep developing the key indicators.”

As a result of this shift, schools will not be held accountable for the academic success of students. The past dozen years have clearly shown that when schools are not accountable for academic outcomes in an honest and transparent way, many fail to focus on what matters most – student learning. And students who have been historically underserved – including African American and low-income students – lose the most.

Leading education states show the importance of having honest data and clear accountability based on student learning, for improving education. Instead of learning from this valuable lesson, Michigan proposes to replace a confusing accountability system with something that lacks both accountability and transparency.

Over the last dozen years, the relative rank of all Michigan students in fourth grade reading has dropped to 41st in the nation, according to the nation’s report card, while African American and Latino students rank 42nd and 43rd, respectively, in fourth grade math. Today, low-income students in Michigan rank 46th compared to their peers in other states.

For Michigan to become a top ten education state, we need more than a motto – we need action. Yet once again, Michigan is following the easy path, instead of the evidence-based path.

House and Senate Appropriation Committees meet this week to consider the Fiscal Year 2017-18 state budget, which funds state government from October 2017 through September 2018. Committees in both chambers are expected to approve budgets, making action from the full House and Senate likely for next week. The final budget is not expected to be approved for several weeks. 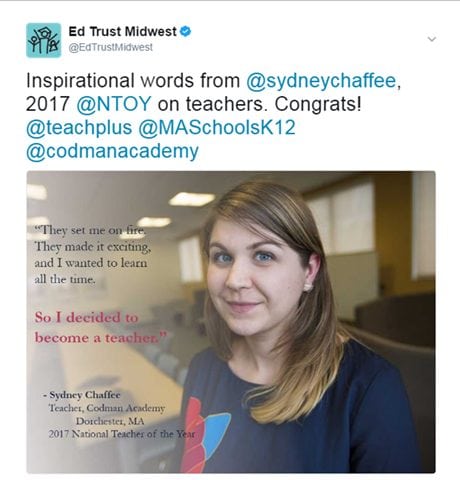