Please note: During the summer, The Education Trust-Midwest will email monthly newsletters on the last Tuesday of each month. Our next newsletter will be on Tuesday, July 25.

Weekly newsletters will resume on September 5.

Budget Passes with Progress and Setbacks

Last week, the Michigan Legislature approved a more than $14 billion schools budget for fiscal year 2017-18, which begins in October 2017. In the budget, the Legislature included important investments for advancing equity in our schools. Unfortunately, the budget also included concerning language that would risk Michiganders’ access to honest and valid information about school performance.

Despite this progress, the budget also gives the Michigan Department of Education the opportunity to change state assessments once again. Like any change in testing, this will cause disruptions for students and teachers. It also puts recent progress at risk – including the state’s new educator evaluation and support system and efforts aimed at improving early reading – important efforts for improving the quality of teaching and learning in Michigan classrooms.

An independent, bipartisan group of education experts found that Michigan’s recently-finalized plan for implementing the Every Student Succeeds Act (ESSA) lacked fundamental information in nearly every category reviewed. In fact, the state received its highest score (3 out of 5) in the category of Standards and Assessments. As noted above, Michigan stands to lose much of our recent progress by changing assessments again.

The analysis, conducted by Bellwether Education Partners, in partnership with the Collaborative for Student Success, was included in a review of the 17 state ESSA plans currently submitted to the U.S. Department of Education.

Many shortcomings of the Michigan plan were previously raised by the Michigan Students Achieves Coalition. This broad, statewide coalition of prominent business, civil rights and education advocacy groups came together to focus on ensuring equity and excellence in the state ESSA plan. Principles for the plan, released in December 2016, included a focus on:

The full analysis of Michigan’s ESSA plan is available here.

Over the summer, the State Legislature will meet once per month.

After a Senate session tomorrow, the next scheduled session date for both the House and Senate is Wednesday, July 12. 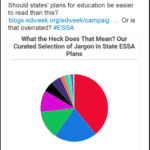 Please note: During the summer, The Education Trust-Midwest will email monthly newsletters on the last Tuesday of each month. Our next newsletter will be on Tuesday, July 25.

Weekly newsletters will resume on September 5.