The following excerpt is from an article that ran in The Detroit News on May 19. The full text is available here.

Report card time. You open the envelope, or perhaps the email, and see a ‘B’. You have a good sense of how your child is faring in class. Unfortunately Michigan is not nearly as clear about the quality of education in a school. In fact, a new proposal will make our state even less transparent and less honest about school quality.

Worse, Michigan has a history of playing with data to hide poor performance. In the past, when schools and students have struggled on the state test, we have made the state test easier to pass. When national data showed Michigan falling quickly behind, the data was dismissed. As a result, parents had no idea that the Michigan education system was in free fall.

The good news is that Michigan seemed to be headed in the right direction — until recently. State Superintendent Brian Whiston proposed giving parents one rating that would clearly and honestly communicate whether a school is doing what it is intended to do — educate students. This would be done using an A-F letter grade. Mostly based on academic measures, the letter grade would have also included other important factors, like chronic absenteeism, access to advanced coursework and career technical education, and access to the arts. This all changed earlier this year, when under pressure, Whiston dropped his plan to use a single, clear indicator of school quality. As a result, schools will not be focused on what matters most, and parents will be left to cipher through a wide range of data to figure out school quality.

Click here for the full text of this article.

State Budget Update: More for Schools, Less for Everything Else

The state budget passed a critical point last week, as leaders from the legislature and administration agreed to revised revenue projections for next fiscal year, which begins on October 1.

At the Consensus Revenue Estimating Conference, state leaders determined that for this 2018 fiscal year, there will be $292.2 million less than expected in the General Fund – which funds state government services outside of public education, but can expect to have $340.3 million more for the School Aid Fund. The School Aid Fund provides the majority of state funding for public schools. The additional funding translates to about $222 more for each K-12 student, although it will most likely not be used to increase per-pupil funding.

Now, differences between budgets passed by the House and Senate, along with the changed spending levels, will be worked out in conference committees. Each chamber will then vote on the compromise budget, which is expected to pass by early June.

In addition to funding, the state budget also provides important opportunities to advance policy priorities. In the past, this has included directing resources toward efforts to improve early literacy and educator effectiveness. As Ed Trust-Midwest recommended in March, the legislature should ensure that any funding for state assessments ensures the continued use of Michigan’s high-quality, independently verified and standards-aligned state assessment. Given the State Superintendent’s move away from holding schools accountable for student learning, it could also make sense for the legislature to require clear and honest school accountability from the Department of Education.

On the Blog: Celebrating and Reflecting on Six Decades ofBrown

The following excerpt is from a blog posted on May 19, 2017 on www.edtrustmidwest.org. The full text is available here.

Through their landmark decision in Brown v. Board of Education, the court formally ended our nation’s practice of enforced segregation in our schools, enshrined in the 1896 doctrine of “separate but equal.”

As Dr. King so eloquently taught, “the arc of the moral universe is long, but it bends towards justice.” We have come a long way, but have much further still to go. As we celebrate and reflect on the importance and legacy of Brown, let us not forget that the fight for equity is ongoing, and that in far too many places, grave injustices still remain.

Gross inequities in the quality of education for African American and Latino students remain. While our students have no ability to change this devastating reality, they will live the consequence of our inaction. As we move forward in our conversations around educational accountability and quality, let us bring these stark realities out of the shadows and ensure that every conversation begins with an open conversation about educational equity.

Celebrating and Reflecting on Six Decades of Brown vs. Board of Education, Amber Arellano, The Huffington Post 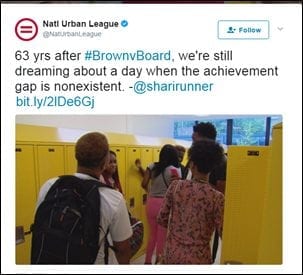