MDE Submits Plan for Implementation of The Every Student Succeeds Act to U.S. Department of Education

The following quote may be attributed to Sunil Joy, Assistant Director of Policy and Research at The Education Trust-Midwest:

“To make Michigan a top ten education state, students, parents and other stakeholders at every level need honest and understandable information about how well local schools are serving their students – including their most vulnerable.“Unfortunately, Michigan’s new education plan is a big step in the wrong direction.

“Rather than providing parents with a clear and meaningful understanding of local school quality – as proposed through a single rating of school quality in the February draft plan – the Michigan Department of Education (MDE) proposes to duck accountability and punt decision making authority to the state legislature and U.S. Secretary of Education Betsy DeVos.

“Once again, Michigan is prioritizing the interests of adults, rather than the needs of students, in our state education system.”

The Michigan House of Representatives and State Senate return to Lansing this week, following a two week recess. With their return, progress on the Fiscal Year 2017-18 state budget is expected to resume.

Over the next few weeks, House and Senate Appropriations Committees are expected to approve budgets for each state department and send budgets to the floor of each chamber for a vote.

Before differences between the House and Senate budgets can be worked out in a conference committee, the House and Senate Fiscal Agencies and the State Treasurer will meet in early May to agree on updated revenue expectations. These updated projections will be used to set 2017-18 spending levels.

The final state budget is expected to be approved and signed by the Governor by the end of June. Fiscal Year 2017-18 runs from October 2017 through September 2018.

The House and Senate reconvene this week, following a two week recess. The primary priority of the legislature over the next couple of weeks is expected to include progress on the state budget.

Senate Education Committee meets today at noon in room 1300 of the Binsfeld Building. Agenda: Senate Bill 249 (Shirkey – R), prohibiting various local governments entities from disallowing the use of property for educational institutions or private schools through law or policy, and in the sale or lease of land; and SB 267 (Emmons – R), repealing the Student Safety Act of 2013.

State Board of Education meets tomorrow, April 19 at 9:30 a.m. in the Ladislaus B. Dombrowski Board Room of the Hannah Building. The agenda includes a presentation on the Governor’s 21st Century Education Commission Report and the Top 10 in 10 plan. 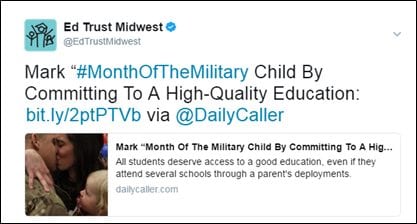