According to a new analysis of national education data, Michigan ranks last for student growth and among the bottom ten states for student proficiency in fourth and eighth grade reading and math. The analysis, by University of Michigan Professor Brian A. Jacob, and published by the Brookings Institution reinforces findings from The Education Trust-Midwest’s 2016 report, Michigan’s Talent Crisis: The Economic Case for Rebuilding Michigan’s Broken Public Education System.

The report also comes on the heels of the release of Michigan’s draft plan for implementing the Every Student Succeeds Act, which increases the role and responsibility of states in improving education for every group of students. Given this increased role, it is even more critical that education leaders at every level are paying close attention to how well schools are serving the academic needs of all students. 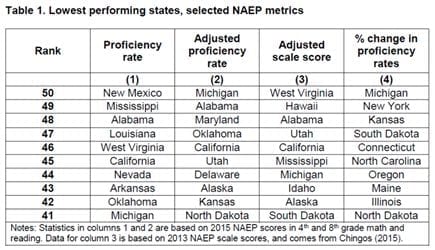 About half of school district leaders agree that the annual assessments that states have begun to administer in recent years do a better job of measuring high-order analytical skill and performance skills than old state tests. Another 40 percent say that it is too soon to tell. And less than 10 percent of district leaders think that the old tests did a better job.

Those findings come from a new report, District Leadership in the Era of Assessment, released by the Center on Education Policy at The George Washington University.

The report is based on a national survey of school district leaders in the 42 states that have adopted the Common Core State Standards, including Michigan. During the 2014-15, Michigan replaced the 40-year-old MEAP test with the Michigan Student Test of Educational Progress (M-STEP). The M-STEP aligns to Michigan’s academic standards and is taken by students in grade 3-8 each spring.

House Committee on Michigan Competitiveness considered testimony on legislation to repeal Michigan’s rigorous career- and college-ready standards and instead implement standards last used nearly a decade ago. No vote was taken.