Earlier today, the Michigan Department of Education released their draft plan for implementing the Every Student Succeeds Act (ESSA). The full draft plan is available here.

Passed in 2015, under ESSA, states have been actively developing plans for how they will measure and make available information on school performance, establish ambitious and achievable school goals, hold schools accountable for serving every group of students well, and supporting improvement when a school is not meeting the needs of all groups of students.

Based on current MDE plans, today will also begin a period of review and public comment on the draft plan, which is expected to continue through March 16. MDE is then expected to revise and finalize the implementation plan by April 3, although they may elect to encourage greater dialogue and public input by not finalizing the plan until September 2017.

More information on Michigan’s draft ESSA plan and public comment will be included in the coming weeks.

Last week, Governor Snyder presented his budget recommendation for fiscal year 2018, which begins in October 2017. Highlight from the School Aid budget include:

Additional information on Michigan’s fiscal year 2017-18 budget will be available throughout the spring.

You see the budding hero in your children. And you know that to save the day, your children will need more than suits and capes. They’ll need opportunities to reach their potential in their schools and classrooms. The Every Student Succeeds Act protects the right of every student — regardless of race, ethnicity, disability, home language, or family income — to receive a quality education. Here is what you need to know — and what you can do — to make sure the law works for your child and other children in Michigan.

House Committee on Michigan Competitiveness meets on Wednesday, February 15 at noon in Room 307 of the House Office Building. Agenda: House Bill 4192 (Glenn – R) which would repeal Michigan’s rigorous career- and college-ready standards and instead implement standards last used nearly a decade ago.

House Committee on Education Reform meets on Thursday, February 16 at 9 a.m. in Room 521 of the House Office Building. Agenda: Presentation by Christy Hovanetz from the Foundation for Excellence in Education and Venessa Keesler from the Michigan Department of Education. 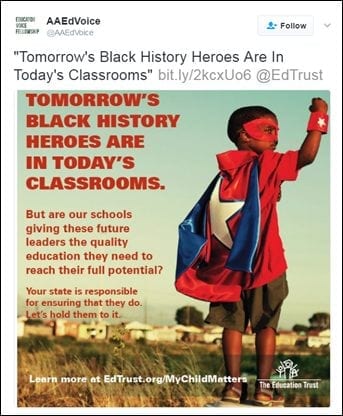