In these divided times, the need to find common ground for Michigan students is more important than ever. And a good starting point to focus our collective efforts to improve education is early literacy.

Research on this topic is robust and clear. When students can read by the end of third grade, they have a stronger foundation for the rest of their education. They are more likely to stay on track and graduate high school, they are more likely to continue their education after high school, and they are less likely to be incarcerated. Given the clear link between educational attainment and economic prosperity, equipping students to succeed in school is also critical for Michigan’s future economy. Yet today, only 46 percent of third-grade students statewide were proficient in reading last year. In Detroit, only 12 percent were considered proficient in reading.

As Crain’s Detroit Business’ Chad Livengood wrote this week, “[i]f business leaders are numbers people, these numbers should frighten them into action. Illiteracy rates like these will prevent Michigan from growing and attracting the talent needed for a business center to thrive in the global, high-tech 21st century economy.” The Education Trust-Midwest agrees and invites Michigan business leaders to get involved. Click here to join Michigan Achieves – our effort to make Michigan a top ten education state, beginning with early literacy.

Earlier this month, the State School Reform and Redesign Office (SRO) identified 38 schools for potential closure due to poor academic performance during the last three school years. In places like Detroit – which has 25 schools on the list – the threat of closure raising a sobering reality. Few better options exist for students.

A Detroit Free Press review of academic data shows that in most cases, a high-performing school option may be many miles away. 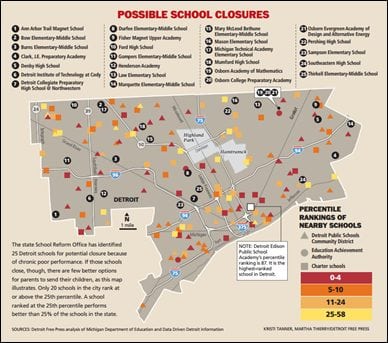 “We cannot close schools and give them no better alternative,” said Tonya Allen, president and CEO of the Skillman Foundation. “That’s the predicament we’re basically putting parents in.”

Amber Arellano, executive director of the Education Trust-Midwest states that this problem isn’t confined to Detroit. “Michigan has a profound lack of supply of high-performing or even mediocre schools in poor and working class communities”

The state is expected to make a final determination on which schools will close this spring.

Senate Education Committee meets today at noon in Room 1100 of the Binsfeld Building in Lansing. Agenda: Senate Bill 27 (Pavlov – R), which would repeal Sec. 1280c of the Revised School Code – Michigan’s “failing schools” law, and discuss a replacement for the section.

Committees for the Michigan House of Representatives were announced on Thursday. 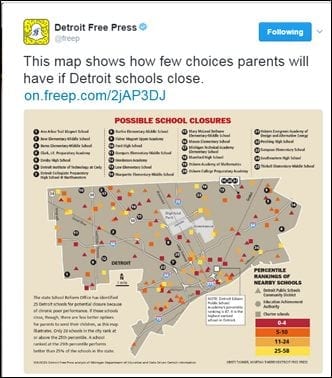